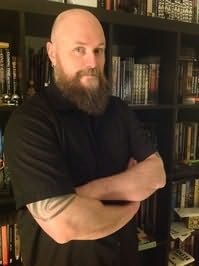 Kill-Off (2014)
John F D Taff
"John F.D. Taff took this reluctant hitman story in a direction I was not at all expecting. This is a believable everyman who happens to be pretty okay at killing people and has a sufficient motivation to do it. Taff blazes a fresh and innovative trail along familiar thriller territory to craft this nail-biter."

Heaven's Crooked Finger (2017)
(Earl Marcus Mystery, book 1)
Hank Early
"With Heaven’s Crooked Finger, Hank Early has not only written one of the very best novels I’ve read this year, but also introduced me to my favorite new mystery detective, Earl Marcus. This book is an expert mixture of action, suspense, and compelling characterization that easily establishes Early as a literary force of nature. From the first page, the tension of the Marcus family’s impact on their small town, and the threat that poses to Earl, builds like a charge in the atmosphere, present and deadly threatening, leading to an ending that is electric. Heaven’s Crooked Finger is going to be on a lot of Best of 2017 lists."

One of Us (2018)
Craig DiLouie
"Without a doubt one of the best books I'll read this year . . . a compelling work of near perfection."

The Chrysalis (2018)
Brendan Deneen
"Deneen wonderfully concentrates the anxiety and emotional strain of trying to live up to the responsibility that comes with a growing family. The problem here is, part of that family is growing behind the spare fridge in the cellar. Deneen hatches all the darkest fears of having 'one on the way."
Visitors to this page also looked at these authors
Jean Rabe
Jonathan Maberry
Dan Wells
Kevin J Anderson
China Miéville
John F D Taff
Scott Nicholson
Weston Ochse
Scott Sigler
Anthony Izzo
Gaby Triana
David Oppegaard
Lisa Brackmann
Simone St James
Daniel Pyle
Dana Fredsti