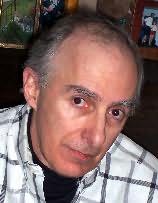 (b.1946)
Thomas F. Monteleone is an American science fiction author and horror fiction author. His first novel, Seeds of Change was the lead-off title in the critically unsuccessful Laser Books line of science fiction titles, but he went on to become a popular writer of supernatural thrillers. He is no relation to Chicago Outfit mobster Tom Monteleone.

Monteleone has been a professional writer since 1972, and 4-time winner of the Bram Stoker Award. He has published more than 100 short stories in numerous magazines and anthologies. His stories have been nominated for many awards, and have appeared in lots of best-of-the-year compilations.

His notorious column of opinion and entertainment, "The Mothers And Fathers Italian Association," currently appears in Cemetery Dance magazine. He is the editor of seven anthologies, including the highly acclaimed Borderlands series edited with his wife, Elizabeth, of which, Borderlands 5, won a Bram Stoker Award in 2003.

He has written for the stage and television, having scripts produced for American Playhouse (which won him the Bronze Award at the International TV and Film Festival of New York and the Gabriel Award), George Romero's Tales from the Darkside, and a series on Fox TV entitled Night Visions. He has written many feature-length screenplays, none of which have been produced.

Slob (1987)
(Chaingang, book 1)
Rex Miller
"Words like powerful, visceral, and monstrous don't even begin to describe the kind of book Slob is. There is a primal energy at work here that won't quit."

4 x 4 (2001)
Geoff Cooper, Michael T Huyck, Brian Keene and Michael Oliveri
"The most balls-out bunch of stories I've read in a long time. Some of it's as raw as Mandrill's blue ass and yet some of it's running deep into the emotional well. Quite an accomplishment."

100 Jolts (2004)
Michael A Arnzen
"Simply stated, there's nothing like this collection of ultra-short fiction. Arnzen continually impressed me with his punchy narrative style and endless images of grue, gore, and gristle. An evening with this book will leave you feeling like you've been gutted like a dead fish and hung out to dry." —Tom Monteleon"

Cemetery Girl (2011)
David Bell
"David Bell is one of the best of the new voices of his generation. He writes with a clarity of both vision and purpose, and his characters are eerily familiar because they are just like you and me. Trust me--you're gonna like this guy."