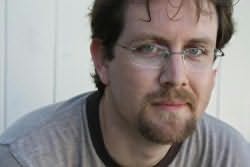 A pseudonym used by Jonathan Wood
Jon Hollins is a pseudonym for urban fantasy author Jonathan Wood whose debut novel (No Hero) was described by Publishers Weekly as a funny, dark, rip-roaring adventure with a lot of heart, highly recommended for urban fantasy and light science fiction readers alike. Barnesandnoble.com listed it has one of the 20 best paranormal fantasies of the past decade, and Charlaine Harris, author of the Sookie Stackhouse novels described it as, so funny I laughed out loud. His short fiction has appeared in Weird Tales, Chizine, and Beneath Ceaseless Skies, as well as anthologies such as The Book of Cthulhu 2 and The Best of Beneath Ceaseless Skies, Year One.

Kings of the Wyld (2017)
(Band , book 1)
Nicholas Eames
"Absolutely awesome. If the Beatles held a concert tomorrow (with all the necromancy required for that to happen), it still wouldn't be as good a 'getting the band back together' story as this. Full of heroes, humor, and heart."