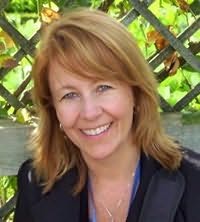 (b.1959)
Julie Hyzy's first experience with food included flipping burgers and chopping onions at a neighborhood hot dog stand. She traded that experience for a job as a singing waitress at Farrell's Ice Cream Parlour.Over the years, she's acted in community theater productions, appeared in television commercials, and crashed a previously all-male fraternity to become one of the first female brothers in Loyola University's Chapter of Delta Sigma Pi. Julie had dreams of becoming a writer, but family, friends, and frat brothers convinced her otherwise. Having held positions as junior officer at a downtown bank, office manager at an architectural firm, and financial advisor at a prestigious wealth management company, she realizes that the business degree was probably a good choice -- but fiction is truly her passion. Now, with some well-earned life experience behind her, she's delighted to finally be able to make writing a priority in her life.

Collections
Made for Murder (2014)

A Cold Day In Hell (2009)
Ken Rand
"Quirky and compelling, Ken Rand's A Cold Day in Hell captures readers' imaginations from its first page. And whether it's Rand's darkly humorous comments on society, his fascinating cast of characters, or the poignant moments that catch you by surprise, A Cold Day in Hell is a story that will stay with you long after you've turned its last page."

To Sketch a Thief (2011)
(Portrait of Crime Mystery, book 2)
Sharon Pape
"Pape has a sure-handed balance of humor and action that makes her a writer to watch."

Murder Sends a Postcard (2014)
(Haunted Souvenir, book 3)
Christy Fifield
"Fifield creates the kind of characters that stay with you for a long time."