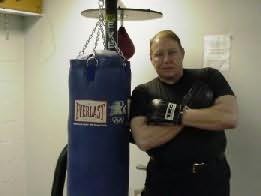 Michael A. Black graduated from Columbia College, Chicago in 2000 with a Master of Fine Arts degree in Fiction Writing. He previously earned a Bachelor of Arts degree in English from Northern Illinois University. Despite his literary leanings, he has often said that police work has been his life. A former Army Military Policeman, he entered civilian law enforcement after his discharge, and for the past twenty-seven years has been a police officer in the south suburbs of Chicago.

The author of over forty articles on subjects ranging from police work to popular fiction, he has also had over thirty short stories published in various anthologies and magazines, including Ellery Queen and Alfred Hitchcock's Mystery Magazine. His first novel, A Killing Frost, featuring private investigator Ron Shade, was published by Five Star in September 2002, with endorsements from such respected authors as Sara Paretsky and Andrew Vachss. The novel received universally excellent reviews, and was subsequently released in trade paperback.

Remember Me (2007)
Sandra L Tatara
"It's a beautiful story, told with grace, elegance, and style. By the end you'll know these characters and consider them closer than family. Don't miss this one."

A Cold Day In Hell (2009)
Ken Rand
"From crooked politicians, to clandestine love affairs, to an obsessed evangelist intent on creating a miracle, to the death of a homeless guy who freezes to death in a Vegas casino named Hell . . . Ken Rand's new book stretches all the boundaries and will delight fans of off-beat mysteries and genre-bending fantasies alike. You'll be entertained through the very last page."

Diver's Paradise (2020)
(Roscoe Conklin Mystery, book 1)
Davin Goodwin
"Diver's Paradise had me hooked from the first pages, from its opening in snowy Rockford, Illinois to the sunny beaches of an island in the Caribbean. Roscoe Conklin, or R, as he's known, is a totally likable and engaging protagonist whom I can't wait to revisit in the next one. Davin Goodwin is a major new talent."