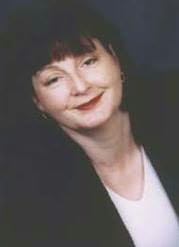 (b.1950)
Kate Walker was born on 1950 in Nottinghamshire, England, but her familymoved to West Yorkshire when she was just 18 months old, and she has alwaysregarded Yorkshire as home. She was the middle child in a family of fivegirls, growing up in a home where books were vitally important, and she readanything she could get her hands on. Even before she could write she wasmaking up stories. At the age of four she was telling the tale of The ThreeLittle Raindrops Drippy, Droppy, and Droopy to her two younger sisters. Shecan't remember a time when she wasn't scribbling away at something, andwrote her first "book" when she was 11.

But everyone told her that she would never make a living as a writer, andthat she should work toward a more secure career. So she decided that if shecouldn't write books, at least she could work with them, and settled forbecoming a librarian. On leaving school she went to the University Collegeof Wales, Aberystwyth to study English and librarianship. While there, shemet her husband, who was also studying at the college. They married andmoved back north, eventually settling in Lincolnshire, where she worked as achildren's librarian until her son was born.

After three years of being a full-time housewife and mother she was readyfor a new challenge, but needed something she could do at home, so sheturned to her old love of writing. Her first attempts at writing novels weredone at the kitchen table, often working late into the night when her sonwas asleep, or during a few snatched hours while he was out at nurseryschool. The first two novels she sent off to Mills & Boon were rejected, butthe third attempt was successful. She can still remember the moment that aletter of acceptance arrived instead of the rejection slip she had beendreading. She must have read that letter over and over a hundred timesbefore what it said sank in, and for days she kept checking it just to makesure she hadn't been dreaming. But the moment she really realised that shewas a published writer was when copies of her first book, The Chalk Line,arrived just in time to be one of her best Christmas presents ever.

Kate is often asked if she's a romantic person because she writes romances.Her answer is that if being romantic means caring about other people enoughto make that extra special effort for them, then, yes, she is. Romance isabout making the important people in your life feel valued and letting themknow that you care. But she also writes about relationships and thedifficulties people sometimes have in understanding each other, orexpressing their feelings, or overcoming problems. Sometimes, when the rightwords won't come, or an idea hasn't worked out as she thought, she wonderswhy she doesn't have a regular nine-to-five job but only sometimes. When thestory's flowing and the characters come alive, she really can't imaginedoing anything else. And there's a tremendous satisfaction in knowing thatshe's doing what she always dreamed of and proving wrong all those peoplewho said she would never make a successful career out of her writing.

During her working hours, her four cats, all adopted from the RSPCA, keepher company in her study, though they have to be dissuaded from sitting onthe piles of papers that they are convinced are there just for theirbenefit. Fitting in hobbies around writing and being a wife and mother canbe difficult, but Kate always finds time to read. She loves all sorts offiction, especially romance, obviously, but she also enjoys historicalnovels, detective fiction, and long, absorbing biographies, and she canspend hours in bookshops, just browsing. Kate loves to hear from herfans. Kate says "I've watched my books go out into the shops, not just herein the UK where I lives but in so many countries all over the world and I'vebeen thrilled to think that so many readers, of all colours, creeds andraces, have bought and enjoyed the stories that I've told, sympathised withmy heroines and fallen in love with my heroes. I've been sent copies of mybooks in so many different styles and different languages and known thatthey've gone out to places I'll never see, to be read by so many peoplethat, sadly, I'll never meet. But we will always share that special linkbecause of my books."

Collections
Her Passionate Italian (2008) (with Carol Marinelli and Michelle Reid)
Mistresses: Shackled with Rubies (2010) (with Lucy Monroe and Lee Wilkinson)

Series contributed to
From Here To Paternity
The Unexpected Child (1997)

Dark Nights with a Billionaire
Kept for Her Baby (2009)

Return of the Rebels
The Devil and Miss Jones (2012)