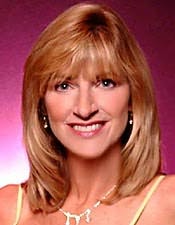 (b.1959)
Leanne Banks was born on 14 May 1959 in Roanoke, Virginia, USA. She holds a Bachelors degree in Psychology, which she claims she can only use on fictional characters. When her first book was published in 1991, she used the money from her advance to take her family to Disney World. She is known for telling a story with strong emotion, characters with whom everyone can relate, a kick of hot sensuality, and a feel-good ending that lingers. She believes in creating stories for her readers that will allow them to escape into a place filled fun, emotion and sensuality. She believes that she has the best readers in the world because they understand that love is the greatest miracle of all. She is the recipient of Romantic Times Magazine's career-achievement awards in Series Sensuality and Love and Laughter, and her books have been recognized by the Award of Excellence Contest, the Romance Writers of America RITA Award contest and the National Readers' Choice Awards. She is grateful for awards and reviews and was particularly moved by a letter from a reader remarking that Leanne's book got her through a chemotherapy session. The reader's letter inspired a favorite turn of phrase: Never underestimate the power of a romance novel.

Leanne lives in her native Virginia with her husband, two teenage children and a Pomeranian. She also has a little condo in South Carolina where she writes in the off-season. She loves music, chocolate, quotes, and new adventures.

Fortune's Children
19. The Secretary and the Millionaire (1999)

Dynasties the Barones
The Playboy and Plain Jane (2003)

Montana Mavericks : The Texans are Coming
5. A Maverick for Christmas (2011)

Cowboy For Every Mood
The Princess and the Outlaw (2012)

Montana Mavericks : Back in the Saddle
A Maverick for the Holidays (2012)