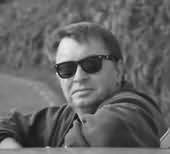 (b.1952)
Noel Hynd is an American author who has more than five million books in print. Most of his books have been in the action-espionage-suspense genre (Flowers From Berlin, Truman's Spy, Murder in Miami, Hostage in Havana, Conspiracy in Kiev, Midnight in Madrid, Countdown in Cairo, The Enemy Within) but others (Ghosts, The Prodigy, A Room For The Dead and Cemetery of Angels) were highly acclaimed ghost stories. He currently has a multi-book publishing contract with Zondervan/HarperCollins.

He is also a former contributor to Sports Illustrated and several other national magazines. His 1988 non-fiction book, The Giants of The Polo Grounds, was an Editor's Choice of The New York TIMES Review of Books in 1988. He has also written several produced screenplays.

Mr. Hynd was born in New York City, is a graduate of the University of Pennsylavnia, and lives in southern California between Los Angeles and San Diego with his wife Patricia.
Genres: Thriller, Horror, Mystery