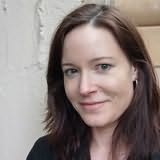 Although she attended UC Santa Cruz, UC Irvine, the University of Leeds in England, and San Francisco State University, she still does not have a bachelor's degree. Lisa spent most of the 1990s hopping through a string of low-paying odd jobs while writing and rewriting the screenplay Plan B, a mob comedy. After the film was made in 2000, she vowed she would never write another screenplay. Lisa lives in the Hudson Valley, NY.

Non fiction
How to Negotiate Everything (2013)

The Yard (2012)
(Scotland Yard's Murder Squad, book 1)
Alex Grecian
"A brilliantly crafted debut novel with unforgettable characters. An utterly gripping tale perfectly evokes Victorian London and brings you right back to the depraved and traumatic days of Jack the Ripper."

Girl Waits With Gun (2015)
(Kopp Sisters, book 1)
Amy Stewart
"Girl Waits with Gun" is fresh, funny and utterly compelling-- and Constance Kopp and her sisters are not just great investigators, but completely original women. It was a blast from start to finish and I can t wait to see what Deputy Kopp gets up to next."

The Sisters Chase (2017)
Sarah Healy
"Part mystery, part road novel, part family saga, The Sisters Chase had me riveted from the first secret to the last revelation. Mary Chase is a force of nature and a truly unforgettable heroine."

Blown (2018)
Mark Haskell Smith
"If you haven't been reading Mark Haskell Smith, get your sh*t together. Start with Blown, which is a blast. It's a gripping, hilarious, wild ride of a book. I loved it."

Tell Me Everything (2019)
Cambria Brockman
"At once a complex thriller and antihero origin story, Cambria Brockman's riveting debut is a true page-turner."