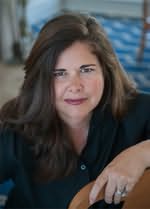 aka Lisa Miscione
Lisa Unger is an award-winning New York Times and international bestselling author. Her novels have sold over 1 million copies in the US and have been translated into 26 different languages.

She was born in New Haven, Connecticut but grew up in the Netherlands, England, New Jersey and New York, where she graduated from the New School for Social Research. Lisa now divides her time, along with her husband and daughter, between Florida and New York City.

The Winter People (2014)
Jennifer McMahon
"Jennifer McMahon is a writer of exceptional talent, and The Winter People is a hypnotic, gripping and deeply moving thriller. With her beautifully drawn characters and complex, layered, and suspenseful story, McMahon has woven a dream from which I didn't want to wake--and couldn't have even if I wanted to."

One Kick (2014)
(Kick Lannigan, book 1)
Chelsea Cain
"Chelsea Cain's One Kick has all the bones of a great thriller--a high-octane story that will never let you catch your breath, non-stop action, and twists galore. But it's Kick Lannigan that really gives this stellar read its heart and soul. Kick is a total badass, armed and dangerous. But you'll cheer for her, worry about her--and you'll pray that, if you ever meet anyone like her, she'll be on your side. Chelsea Cain has outdone herself -- and that's no small feat."

The Killing Lessons (2015)
(Valerie Hart, book 1)
Saul Black
"The Killing Lessons is a dark, twisted, and deeply compelling read. Saul Black perfectly inhabits each of his characters, even the most deranged among them, and weaves a breathless thriller that is as beautiful as it is terrifying."

Unreliable (2017)
Lee Irby
"Creepy, twisted, darkly funny, and totally riveting, Lee Irby's Unreliable kept me guessing from the first page to last. You'll be off kilter the whole ride on this tilt-a-whirl of a book, and you'll enjoy every second."

Not a Sound (2017)
Heather Gudenkauf
"This is a thrill ride to be sure, but it's also a gripping tale of tragedy and redemption. If you haven't read Heather Gudenkauf yet, now's the time."

The Take (2018)
(Simon Riske, book 1)
Christopher Reich
"The Take is a slick, elegant, and gripping spy thriller of the first order. With a brilliant heist, a twisting web of secrets and intrigue, and an adrenaline-fueled plot, Reich whisked me out of my world and into his from the explosive first pages. Simon Riske is my favorite kind of hero--flawed, dark, and utterly intriguing. Fabulous!"

The Elizas (2018)
Sara Shepard
"A twisting, clever thriller with a smart, darkly funny, and totally unreliable narrator at its heart. I was rooting for the troubled, sharp-tongued Eliza, even as Shepard deftly blurred those very thin lines between lies and the truth, fact and fiction. A sizzler!"

Liar's Candle (2018)
August Thomas
"Tightly-plotted, well-written, and astute, Liar’s Candle is a remarkable debut. August Thomas delivers an atmospheric and twisty spy thriller that manages to be both assured and fresh. With a colorful, authentic sense of place, a rocket-paced plot full of deception and betrayal, and a young, naive heroine, Penny Kessler, at its center, this is both an exciting story of espionage and a compelling coming of age tale."

Jar of Hearts (2018)
Jennifer Hillier
"We all have embarrassing exes, right? You almost feel bad for Geo, the slippery heroine at the heart of Jennifer Hillier’s dark and twisted tale. It’s just that Geo's ex turns out to be a serial killer. And, maybe, just maybe, she had something to do with his first murder; and, oh, that first murder victim was one of Geo’s best friends. Hmm. I was hooked on page one. Hillier’s masterful story-telling and compelling voice pulled me deeper and deeper. The plot only twisted and ratcheted tighter from there until I couldn’t pull away. This is a smart, edgy thriller with lots of surprises. Buckle up."

The Real Michael Swann (2018)
Bryan Reardon
"The Real Michael Swann is a twisting, heart-wrenching journey into a marriage, a gripping thriller, and the story of a family ripped apart by terrible violence. Bryan Reardon grabs his readers on page one, then deftly ratchets the suspense page-by-page revealing slim fragments of truth until the breathless ending. A chilling, haunting read."

You Were Made for This (2018)
Michelle Sacks
"A sinister, razor's edge of a book. I was, in turn, totally gripped, completely unsettled, and not just a little freaked out by these brutal characters and the damage they did to themselves and each other. Whatever you feel while reading this dark, twisting story, you definitely won't be able to put it down."

The Banker's Wife (2018)
Cristina Alger
"The Banker's Wife is a glamorous and twisting novel of international intrigue, the secrets and lies that stitch a marriage together, and a wife's desperate search to understand the husband she thought she knew. The rocket-paced plot and transporting sense of place will sweep you away, but it’s the smart, determined women at the heart of the story that keep you riveted through the breathless ending. Cristina Alger delivers on every level."

The Disappearing (2018)
Lori Roy
"As dark and atmospheric as a Northern Florida summer night, The Disappearing is Lori Roy at the top of her game. Her simmering tale is, at the heart, a compelling mystery. But it’s also a deep meditation on family and the secrets and lies that can twist through our lives like a strangler fig. The powerful sense of place and a haunting cast of characters linger long after the book is closed. If you haven’t read Lori Roy, now is the time."

Somebody's Daughter (2018)
David Bell
"Somebody's Daughter is a compulsive, twisty, race-against-the-clock thriller. But it’s also a sensitive meditation on what connects us to each other--and what we’ll do to hold on when life tears us apart. Don’t miss this smart and unrelenting page-turner!"

Too Far (2018)
Jason Starr
"A rocket-paced, propulsive, and utterly addictive thrill-ride. Jason Starr is a master of ratcheting up the suspense page-by-page, making it totally impossible to look away."

Restoration Heights (2019)
Wil Medearis
"An atmospheric and poetic noir debut. Wil Medearis paints a vivid portrait of the changing face of New York City while crafting a compelling old-school mystery against that gritty, thoroughly modern backdrop. A Brooklyn artist turned private investigator—such a clever premise! And its stellar execution—rich with character, and sparking with the friction of all the city's hard edges of race, culture and class—is utterly immersive."

The Liar's Child (2019)
Carla Buckley
"Carla Buckley has a rare gift for character. In The Liar’s Child, she digs deep into the hearts of the troubled, flawed, and all-too-human souls who populate this beautifully written and utterly involving novel. I didn’t so much open the jacket on this book as fall inside the compelling story and get tangled up in all the lives, loves, broken dreams, and mistakes. Then I held tight, white knuckled, through the twisting inexorable ride."

The Lying House (2019)
Rick Mofina
"A blood pact, a horrific crime, and a lifetime of secret and lies come back to haunt in this layered, engrossing thriller. Their Last Secret is Rick Mofina at his edge-of-your-seat, can't-stop-turning-the-pages best as he dives deep into questions of truth, justice, and ultimately redemption. A riveting, moving read."

A Madness of Sunshine (2019)
Nalini Singh
"Lush, atmospheric, and addictive, A Madness of Sunshine seduces with its beautiful sense of place and layered, compelling characters, then hooks you right in with a riveting noir mystery. When a beautiful girl goes missing and a dark past collides with the brutal present, the truth is as harsh and unforgiving as the landscape in which Nalini Singh's twisting tale is set."

Last Day (2020)
Luanne Rice
"A dark family history. A deeply flawed marriage. The complicated tangle of the ties that bind. Luanne Rice writes with authenticity and empathy, unflinchingly exploring her characters and diving into the shadowy spaces where they hide their secrets. Like all great stories, Last Day is a compulsive, twisting mystery dwelling inside a searing portrait of what drives us, as riveting as it is human and true."

The Golden Cage (2020)
Camilla Läckberg
"The Golden Cage is a twisting, brutal tale of betrayal and revenge. Lackberg paints a vivid portrait of a dark and complicated anti-heroine who is both the abused and abuser, victim and victimizer. A chilling, timely read sure to thrill her international legion of fans!"

The Mountains Wild (2020)
Sarah Stewart Taylor
"Atmospheric and lyrical, THE MOUNTAINS WILD is that rare thing -- a riveting thriller with a beating heart. In this beautifully wrought portrait of love and family, secrets and lies, Sarah Stewart Taylor dives deep into character, all the while ratcheting up the suspense, page by gripping page, through to the stunning end."

The Second Mother (2020)
Jenny Milchman
"Rich in atmosphere, expertly plotted, and populated by characters that live and breathe, The Second Mother is as much a portrait of survival and redemption as it is a harrowing deep dive into the secrets and troubles of an isolated island in Maine. Jenny Milchman writes with insight and compassion, creating a vivid sense of place, and masterfully ratcheting up the tension page by gripping page."

Girls of Brackenhill (2020)
Kate Moretti
"A looming castle, a woman haunted by her sister’s unsolved disappearance, and long buried secrets clawing their way up to the surface—Kate Moretti deftly weaves it all together in a gripping gothic ghost story of the first order. Girls of Brackenhill is full of chills, thrills, and dark surprises. You won’t stop turning the pages until the stunning end—and even then you’ll be sleeping with the lights on. Don’t miss it!"

If I Disappear (2021)
Eliza Jane Brazier
"A propulsive thrill ride full of surprises right through the firecracker ending."