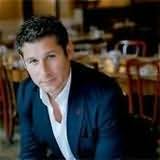 (b.1968)
Chris Pavone grew up in New York City, and attended Midwood High School in Brooklyn and Cornell University, where He majored in government. He worked at a number of publishing houses over nearly two decades, most notably as an editor at Clarkson Potter, where he specialized in cookbooks (he loves to cook). In the late nineties, He also wrote a little book called The Wine Log. He now lives in Greenwich Village and the North Fork of Long Island.

Night Heron (2014)
(Philip Mangan, book 1)
Adam Brookes
"Night Heron is a wonderfully cinematic novel -- I felt myself visually transported into every scene, watching the action unfold -- that also immersed me in the sounds and smells and feel of China, all the while telling a rich, complex espionage story. A remarkable accomplishment."

The Kind Worth Killing (2015)
Peter Swanson
"Filled with double-timers and double-crossers, cold-eyed stalkers and cold-blooded murderers, The Kind Worth Killing paints a riveting, disturbing picture of marriage gone horribly awry, with no shortage of startling surprises. If you're engaged to get married, by all means read something else."

The Killing Lessons (2015)
(Valerie Hart, book 1)
Saul Black
"If you want to ruin a perfectly good weekend with a gut-wrenching, spine-tingling, deeply disturbing, edge-of-the-seat-thrilling crime novel, The Killing Lessons is your ticket. Beware."

The Passenger (2016)
Lisa Lutz
"A sharp, clever, and utterly compelling thriller about a woman running from the mistakes and misfortunes of her past. Terrific."

What You Don't Know (2017)
JoAnn Chaney
"Superb characters, sparkling dialogue, and a gripping, terrifying plot, plus flashes of humour to boot; this book has it all."

Say Nothing (2017)
Brad Parks
"Say Nothing is tremendously satisfying, packed with engaging characters and surprising plot twists and a furious build of tension until its gut-wrenching pay-off."

What She Saw (2017)
Gerard Stembridge
"A fast paced romp through the streets of Paris, with menace lurking in surprising quarters, and some terrific twists."

A Map of the Dark (2018)
(Searchers , book 1)
Karen Ellis
"A terrific novel, wonderfully written, richly populated, and utterly gripping from start to finish."

The Italian Party (2018)
Christina Lynch
"Tremendous fun! Wives with big secrets, husbands with bigger ones, swirling around a 1950s Siena teeming with seduction and spycraft."

The Banker's Wife (2018)
Cristina Alger
"A knockout of an international thriller, with glamorous lives on collision courses with high-stakes crime and high-level politics through the corridors of power in Europe and America. Plus, Alger accomplishes the remarkable in making even Geneva seem exciting."

The Never Game (2019)
(Colter Shaw, book 1)
Jeffery Deaver
"Jeffery Deaver is a one of our most exciting storytellers, and The Never Game pulls off the remarkable feat of intertwining a devilish plot with unforgettable characters, fascinating disquisitions with propulsive action, every element conspiring to make it almost impossible to not turn the page. I absolutely loved it."