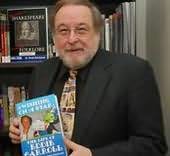 aka Will Bradley
William Bradley Strickland is an American author known primarily for his fantasy and science fiction. He was born in New Holland, Georgia.

His first novel, To Stand Beneath the Sun, was published in 1985. Since, he has written or co-written sixty-plus novels and more than a hundred short stories. In 1992 Strickland completed four novels begun by the late John Bellairs; beginning in 1996 he has created his own stories using the already-established characters.

His 2000 book, When Mack Came Back, won Strickland the 2001 Georgia Author of the Year Award, Children's/Young Adult Division honor. In 2002, Strickland and Thomas E. Fuller began the Pirate Hunter series and, later, the Mars Year One series. Mr. Fuller died before all the books were published.

Lewis Barnavelt (with John Bellairs)
5. The Vengeance of the Witch-Finder (1993)
6. The Doom of the Haunted Opera (1995)
continued in the series by Brad Strickland

Johnny Dixon (with John Bellairs)
9. The Drum, the Doll, and the Zombie (1994)
continued in the series by Brad Strickland

Non fiction
Wishing on a Star: The Life of Eddie Carroll (2013) (with Carolyn Carroll)