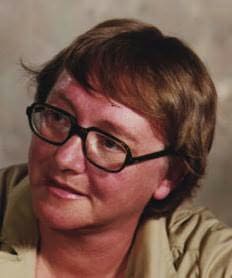 aka Lee Chapman, John Dexter, Miriam Gardner, Morgan Ives
Marion Zimmer was born in Albany, NY, on June 3, 1930, and married Robert Alden Bradley in 1949. Mrs. Bradley received her B.A. in 1964 from Hardin Simmons University in Abilene, Texas, then did graduate work at the University of California, Berkeley, from 1965-67.

Writing for over 4 decades, she is best known for her Darkover science fantasy series and her Arthurian masterpiece, The Mists of Avalon. She also edited anthologies for 14 years and published Marion Zimmer Bradley's FANTASY Magazine.

She died in Berkeley, California on September 25, 1999, four days after suffering a major heart attack.

The Dark World (1946)
Henry Kuttner
"I consider the work of Henry Kuttner to be the finest science fantasy ever written."

Poor Tom's Ghost (1977)
Jane Louise Curry
"The best children's fantasies of which this is definitely one - offer no insult to the intelligence of the adult reader. If you buy this for your pre-teenager and don't read it for yourself, you are missing a memorable reading experience, and a very poignant evocation of the pre-adolescent mind."

The Dragon Waiting (1983)
John M Ford
"I read it with delight, wonder, and fascination. The book plays, with a truly wonderful seriousness, the game of fantasy and history. I love it."

Children of the Night (1990)
(Diana Tregarde, book 2)
Mercedes Lackey
"Easily one of the best things I've read for a couple of years. I loved it."

The Little Country (1991)
Charles de Lint
"One of the most fascinating books of this decade."

The Skystone (1992)
(Camulod / Legends of Camelot, book 1)
Jack Whyte
"It's one of the most interesting historical novels that I've ever read and I've read plenty."

The Year the Horses Came (1993)
(Earthsong, book 1)
Mary Mackey
"A fascinating prehistoric world... the best of its kind."

The Prince of Ill Luck (1994)
(Warhorse of Estragon, book 1)
Susan Dexter
"One of the most delightfully funny books I've read in my life."

Daughter of Prophecy (1995)
(Power and the Pattern, book 1)
Anne Kelleher Bush
"Fascinating - a most ingenious blend of science fiction and fantasy."

Met by Moonlight (1998)
Rosemary Edghill
"A story of true magic... It's been many years since I've read anything with such power and passion."