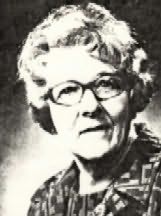 (Ethel Snelson Summers Flett)
New Zealand (1912 - 1998)
Ethel Snelson Summers, well-know as Essie, was born on Bordesley Street inChristchurch, New Zealand on July 24, 1912. Her parents, Ethel Snelson (forwhom she was named) and Edwin Summers, had immigrated to New Zealand fromEngland exactly one year earlier. She had an older brother, Edwin and ayounger brother, William. She grew up in a warm and happy home where readingand story-telling were highly valued, and from a very early age little Essiewas making up her own stories. When a teacher read aloud "Emily of New Moon"by L M Montgomery, she knew then that she wanted to be a writer. When shewas young she had red hair, like many of her heroines, and she has said thatshe had a very quick temper, which she later learned to control. Essie leftschool early for financial reasons and began work at Londontown Drapers andshe did similar work for the next 13 years, until her marriage. Essiemarried William Flett, a minister, after a courtship conducted mainly byletters, and they settled into parish life together. They lived in variousparts of the North and South Islands of New Zealand though they eventuallysettled in Hawke's Bay in the North Island. They had two children, WilliamTemple and Elizabeth Lucia, and seven grandchildren. As a minister's wifeand a mother, her life was very full, but she was still a prolific writer ofshort stories, poems and, for a time, a newspaper column. Finally, herhusband told her that if she was to achieve her goal of having a novelpublished by the time she was forty-five, the time to start was now. Withhis help she was able to concentrate on her writing and had her first novelpublished the day after her forty-fifth birthday! She went on to become oneof the world's most beloved romance writers and a strong supporter of otheraspiring writers. When she had achieved some financial security with herwriting, she and her husband fulfilled a life-long dream and travelled toGreat Britain and parts of Europe, where she was able to visit many of theplaces where her ancesters had lived. She writes very movingly in herautobiography about seeing the places where her parents had come from andmeeting her English relatives. Essie went on to use many of those settingsin her novels. In all she wrote fifty-six novels and an autobiography, plusher family history, before her death in Napier at the age of eighty-six onAugust 27, 1998. She was predeceased by her husband in 1984. Many of herfans have travelled to New Zealand to see for themselves the country thatshe described so vividly in her books. Because of this Essie Summers wasoffered The Order Of The British Empire for her contributions to tourism.

Genres: Romance
Series
Heatherleigh
1. New Zealand Inheritance (1957)
aka Heatherleigh
2. The House of the Shining Tide (1962)
aka The House Of The Shining Waters
3. Rosalind Comes Home (1968)

Corriefield
1. Come Blossom Time, My Love (1961)
aka The Fraser Inheritance