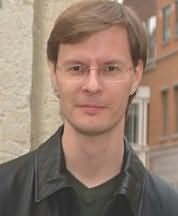 Canada (b.1962)
Schroeder was born September 4, 1962 in Brandon Manitoba. His family are Mennonites, part of a community which has lived in southern Manitoba for over one hundred years.

He moved to Toronto in 1986 to pursue my writing career and married Janice Beitel in April 2001.

Collections
The Engine of Recall (2005)

The Risen Empire (2003)
(Succession, book 1)
Scott Westerfeld
"The Risen Empire is full of relentless and addictive action which is supported by some truly wild ideas. Westerfeld's blend of traditional space opera and cutting-edge speculation makes this a truly twenty-first century SF novel."

The Promise of the Child (2015)
(Amaranthine Spectrum, book 1)
Tom Toner
"One of the most ambitious and epic-scale pieces of worldbuilding I’ve read."