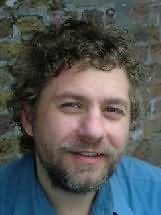 (b.1970)
Shearman was educated at Reigate Grammar School (where he was a contemporary of David Walliams) and University of Exeter. During this time, he was regularly seen on stage at the University in various productions, and made his broadcasting debut as the reporter Fergus McIntyre, reporting on University Radio Exeter (almost live) from Zagreb at the 1990 Eurovision Song Contest.

An established theatrical playwright, Shearman has worked with Alan Ayckbourn, had a play produced by Francis Ford Coppola, and has received several international awards for his work in theatre. His plays include Fool to Yourself, which premiered at the Stephen Joseph Theatre in 1997.

His association with Doctor Who began with a play written for BBV Audios, Punchline, in which Sylvester McCoy played the Dominie, a disguised version of the Seventh Doctor. This was penned under the pseudonym "Jeremy Leadbetter" (the name of a character from the popular BBC sitcom The Good Life). Several audio plays for Big Finish followed. He has also had Doctor Who short stories published.

Genres: Science Fiction, Horror
Novels
They Do the Same Things Different There (2014)

Doctor Who : Eighth Doctor
The Chimes of Midnight (2002)

Five Stories High
4. The Best Story I Can Manage Under the Circumstances (2016)

Little Digs (2020)
Lisa L Hannett
"Lisa L. Hannett’s collections plays like a country music album composed in the darker places of imagination, the little corners that you don’t want to look in as you tap-tap your foot to the catchy beat. Coolly beautiful, then coldly brutal, this is one of the most unnerving debuts in years."