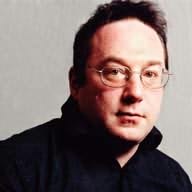 (1963 - 2013)
Joel Lane was a British author, poet, critic and anthology editor. Born in Exeter, he lived in south Birmingham (the latter city frequently provides settings for his fiction).

Lane's poetry earned him the Eric Gregory Award in 1993; four collections have been published, the most recent in 2006. He edited the fantasy anthology Beneath the Ground (2002) and, with Steve Bishop, Birmingham Noir: Urban Tales of Crime and Suspense (2002).

Novellas
The Witnesses are Gone (2009)