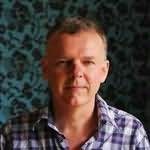 William Shaw is the author of several non-fiction books including Westsiders: Stories of the Boys in the Hood, about a year spent with the young men of South Central Los Angeles, and A Superhero For Hire, a compilation of columns in the Observer Magazine. A Song from Dead Lips is the first in a trilogy of crime fiction books set in London in 1968 1969.

Starting out as assistant editor of the post-punk magazine ZigZag, he has been a journalist for The Observer, The New York Times, Wired, Arena and The Face and was Amazon UK Music Journalist of the Year in 2003.

Brothers in Blood (2017)
(Zaq & Jags, book 1)
Amer Anwar
"This is such a thrillingly authentic slice of London life. No one's written these characters before - and done it so well."

Yesterday (2017)
(Hans Richardson, book 1)
Felicia Yap
"Never has psychological crime fiction been so original, so witty and so inventive. This is an absolute firecracker of a read. I haven't enjoyed a debut this much in ages."

Too Close to Breathe (2018)
(Frankie Sheehan, book 1)
Olivia Kiernan
"Disorderly, dangerous and above all, driven, Frankie Sheehan is the kind of true-to-life protagonist I love."

What You Did (2019)
Claire McGowan
"Utterly compulsive. It’s the way that McGowan makes you realize that the real horror can come from the people you hold closest that makes this totally compelling."

The Art of Death (2021)
David Fennell
"A tense-as-hell high-body count page turner, but a rarer thing too - one that's also full of genuine warmth and humanity."