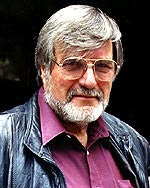 (b.1928)
Patrick Tilley spent his formative years in the counties of Northumbria and Cumbria. He studied art at King's College, Durham and worked as a graphic designer. He began writing episodes for a TV series and went on to become scriptwriter and creative advisor on several major films before writing FADE-OUT, his first novel.

Non fiction
The Illustrated Guide to the Amtrak Wars (1988)