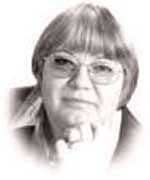 Amanda Browning and her twin sister were born in the East of England. Shegrew up in a big family in one home on the borders of Essex. She enjoys herextended family, and is Great-Aunt to eighteen nieces/nephews. Her twinsister's two grandchildren are especially close, and she risks seriousdamage to her back when playing the fool with them! She is still happilysingle, and continues living in the old family home.

Amanda began writing romances when she left her job in libraries andwondered what to do next. She remembered a colleague once told her to writea romance, and went for it. Her first effort elicited an invitation to visitMills & Boon HQ, then off Bond Street. Although her first two manuscriptscould not be used, the third was accepted and published in 1987, and shehasn't looked back since.

Besides writing, which occupies a great deal of her time, she is veryinterested in researching her family tree. This has led to discoveringrelatives in the United States and Canada, and just recently these relationshave visited the UK. She is about to plunge into the world of the Internetin order to make more discoveries which should be interesting in more waysthan one!

What is left of her spare time is spent doing counted cross stitch. Shereally enjoys the designs based on the works of Marty Bell, and the gorgeousdesigns of Victorian ladies and Angels in Lavender and Lace and Memorabiliaranges. They are so intricate and it is very satisfying to finish one andfinally see it hanging on a wall.

Of course, she still manages to find time for some gardening. Like mostgardeners, she is constantly waging war against cats, who think the beds aretheir private toilets, and the snails who dine out on her flowers. So farshe has resisted the ultimate deterrent of trekking out, at night with atorch and a bucket, but she's giving it serious consideration!

Collections
Once a Playboy... (2012) (with Amanda Cinelli and Kate Hardy)