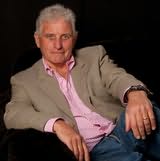 (b.1943)
he son of a colonial police officer, Patrick was born in Cyprus at the tail end of 1943 and lived there until, at the age of 12, when he was sent home to school in England. The cold and rain which greeted him was in stark contrast to the sunshine and the beach where his life had, until that moment, been largely spent. It was to be many years before he could begin to think of England, rather than Cyprus, as his home.

On leaving the police srvice in 1994, Patrick became a journalist chasing deadlines for technical magazines and articles in national newspapers. He still writes, full time, but now concentrates on his novels. He lives in Sussex with his wife and three dogs, working out of&#160a Victorian pump-house, complete with its own well and pumping machinery, in the grounds of his home.