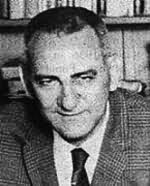 (1920 - 1976)
Daniel F. Galouye was born and died in New Orleans. He was a Naval test pilot during the Second World War and subsequently worked as a journalist. The delayed effect of war injuries forced him to retire in 1965. Dark Universe was his first novel and was shortlisted for the Hugo Award. His other novels include Counterfeit World, The Lost Perception and The Infinite Man.