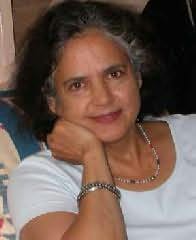 India (b.1941)
Jamila Gavin was born in India andgrew up on the border between India and Pakistan. She first visitedEngland when she was five, and settled here for good when she was11.

Jamila went to loads of different schools but neverliked the discipline they imposed. She left as soon as she couldand went to the Guildhall School of Music, where she studied tobecome a concert pianist.

Though she never became a professional performer,Jamila continued to love music and she worked in the musicdepartment at the BBC before becoming a writer.

She wrote her first book when her children were bornbecause she realised that there were very few books that reflectedtheir experience of being multi-racial.

In later stories, and particularly in her SuryaTrilogy, she drew on her own childhood memories of growing up inIndia. In particular, the relationships between English and Indianfamilies at a time when India was becoming an independent country.

Non fiction
Out of India (1997)
An Interview with Jamila Gavin (2002)
Meetings with the Minister (2003) (with Bernard Ashley, Anne Fine, Chris Powling and Philip Pullman)
Alexander the Greatest (2009)

Saving Rafael (2009)
Leslie Wilson
"There is an almost Anne Frank quality about the thoughts and aspirations of young Jenny.This is a book which is not only a compelling read, but gives deep insights into the moral and physical disarray of a nation which has allowed itself to be hijacked by one of the greatest evils of our times. There were thousands of Germans who quietly opposed the Nazis; who sacrificed their lives defying them, and who risked everything to help the Jews in their midst. Leslie Wilson has performed a great service in reminding us of their courage."

What Was Rescued (2017)
Jane Bailey
"A cat’s cradle of a read, where truth and lies, love and deception twist and interweave. It is about cause and effect; of how seeds, planted in childhood trauma, branch out unexpectedly in adulthood as Bailey’s characters try to differentiate between love and desire, jealousy and betrayal."
Visitors to this page also looked at these authors
Beth Garrod
Susan Cox
Mark Hodder
Catherine Johnson
Ronald Welch
Derek Landy
Matt Haig
Alan Gibbons
Erin Hunter
Sam Llewellyn
Susan Cooper