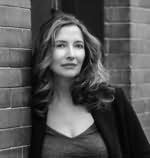 Barbara Nickless is an award-winning author whose short stories and essays have appeared in anthologies in the United States and the United Kingdom. An active member of Mystery Writers of America and Sisters in Crime, she has given workshops and speeches at numerous writing conferences and book events. She lives with her family in Colorado. Blood on the Tracks, which won the Daphne du Maurier Award and was a runner-up for the Claymore Award, is her first novel.

Pushback (2018)
John E Stith
"John Stith long ago showed himself master of the science fiction genre. With Pushback, he proves he's also a terrific mystery novelist. Pushback is dynamite! Stith takes you on a gripping ride of twists and turns while the tension tightens like a noose, right up to the thrilling conclusion. A sympathetic and enterprising hero and a stop-at-nothing villain will make you just as eager as Dave Barlow to figure out who wants to ruin him. And who wants him dead."

Come and Get Me (2019)
(Caitlin Bergman Mystery, book 1)
August Norman
"August Norman’s debut has it all: sharp dialogue, terrific twists and a smart, gutsy heroine you’ll root for. Come and Get Me is a taut, timely thriller that delivers."

Throwing Off Sparks (2020)
(Riley Reeves Mystery, book 1)
Michael Pool
"Private investigator Riley Reeves is exactly how I like my sleuths: whip-smart, tenacious, and compassionate. And tougher than a Texas rattlesnake when it comes to meting out justice to violent criminals. With its page-turning pace, surprising turns, and an insider's look at the underbelly of Texas society, author Michael Pool has launched a must-read series. I loved it!"