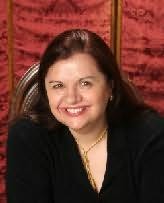 aka Sarah D'Almeida, Elise Hyatt
Hoyt was born on November 18, 1962 in the village of Granja, Águas Santas, Maia near Porto, Portugal, a major port city on the Atlantic coast. Educated in both Portugal and the United States, she graduated from University of Porto, with a Master's equivalent in Modern Languages and Literature with a major in English and a minor in German. She also speaks Swedish, Italian and French, with varying degrees of fluency. Married in 1985 to Dan Hoyt (a science fiction author and mathematician), she has two teenaged sons. She became a United States citizen in 1988 in Charlotte, North Carolina. She is a member of Mensa, SFWA, MWA, and RWA. She was the first female member of the Associação Atlética de Aguas Santas (the sports club in Aguas Santas Maia).

Joy Cometh With The Mourning (2014)
(Reverend Joy Mystery, book 1)
Dave Freer
"This mystery kept me up all night while i read it through twice! Like a good cozy, even when you know the solutions, you want to spend more time with the characters. All i can say is, Dave Freer better have sequels planned."