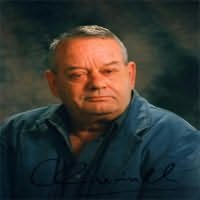 (1940 - 2005)
A. J. Quinnell was the pen name of Philip Nicholson, a mystery and thriller writer. He traveled throughout his life and several of the minor characters in his books are actual people he met. He was married three times. His last wife, Elsebeth Egholm, is a Danish mystery novelist. The couple resided on the island of Gozo and Denmark.

When the author was getting ready to publish his first book, he decided he wanted to keep his real identity a secret. During a conversation in a bar, his agent (who is also J. K. Rowling's agent) told him he could use a pseudonym. The author chose "Quinnell" after rugby union player Derek Quinnell and "A. J." because they were the initials of the bartender's son.

The author's best known creation was the character of Marcus Creasy, an American-born former member of the French Foreign Legion. The Creasy novels are cult favorites in Japan.

Man on Fire was adapted to film twice, in 1987 and 2004. This has resulted in a wider demand for Quinnell's books, especially those featuring Creasy, including The Blue Ring and Message From Hell.