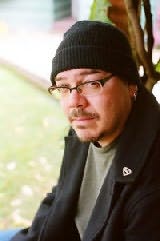 (b.1969)
Greg Rucka is the author of nearly a dozen novels, six featuring bodyguard Atticus Kodiak, and two featuring Tara Chace, the protagonist of his Queen & Country series. Additionally, he has penned several short-stories, countless comics, and the occasional non-fiction essay. In comics, he has had the opportunity to write stories featuring some of the world's best-known characters—Superman, Batman, and Wonder Woman&#8212as well as penning several creator-owned properties himself, such as Whiteout and Queen & Country, both published by Oni Press. His work has been optioned several times over, and his services are in high-demand in a variety of creative fields as a story-doctor and creative consultant.

Greg resides in Portland, Oregon, with his wife, author Jennifer Van Meter, and his two children. He thinks the biggest problem with the world is that people aren't paying enough attention.

Graphic Novels
Sorry, we're not listing graphic novels by this author
Series contributed to
Journey to Star Wars: The Force Awakens
Smuggler's Run (2015)
Before the Awakening (2015)

Star Wars: Rogue One
Guardians of the Whills (2017)