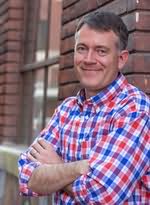 R.J. Patterson is an award-winning writer and thriller author living in the Pacific Northwest. While growing up in a military family, he spent some of his formative years living with his family on the estate of an English baron and baroness. It was there that he developed his passion for good literature and an appreciation for football.

Upon returning to the United States, R.J. entered the field of journalism where he won numerous writing awards and has written articles for many prestigious U.S. newspapers, including The New York Times. He later left journalism full-time to pursue writing books and now resides in the Pacific Northwest with his wife and four young children. He plans to write many more thrilling novels unless the CIA presses him into service to save the world.