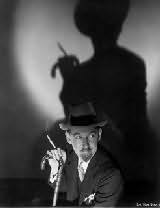 (1888 - 1939)
Around 1925 Willard Huntington Wright, critic and writer, underwent a long illness. As part of his convalescence he wrote The Benson Murder Case, in which he created the character of Philo Vance, a master sleuth. So that the book would not be compared to his other works he adopted the pseudonym S.S. Van Dine. By the time The Canary Murder Case, the second in the series was published, Van Dine had become a best seller.