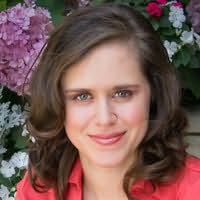 Helene Wecker grew up in Libertyville, Illinois, a small town north of Chicago, and received her Bachelor's in English from Carleton College in Minnesota. After graduating, she worked a number of marketing and communications jobs in Minneapolis and Seattle before deciding she wanted to write something longer than a press release. Accordingly, she moved to New York to pursue a Master's in fiction writing at Columbia University. She now lives near San Francisco with her husband and daughter.
Series
Golem and the Jinni
1. The Golem and the Jinni (2013)
2. The Hidden Palace (2021)

The Chosen and the Beautiful (2021)
Nghi Vo
"Nghi Vo's stellar transformation of The Great Gatsby recasts the 'careless' Jordan Baker as a woman of depth and sharpness, a socialite forced to live in the margins of others’ lives. In Vo’s telling, the glitter of Gatsby’s parties conceals a sinister struggle-one where the players must survive on charms both literal and figurative, and the line between the invented and the real is endlessly blurred. Like Jordan’s own paper creations, The Chosen and the Beautiful captivates with its artistry and its power."
Visitors to this page also looked at these authors
Beatriz Williams
Martha Wells
Jonathan Evison
Katherine Addison
Jill Shalvis
Jenny Colgan
Susan Elizabeth Phillips
Jennifer Weiner
Lionel Shriver
Francine Prose
Iris Johansen
James Patterson
Holly Black
Ian Rankin
Alison Weir
Charles Martin