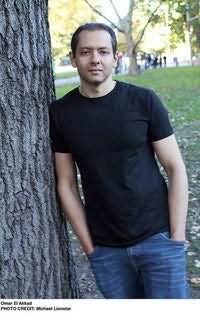 Egypt
OMAR EL AKKAD was born in Cairo, Egypt and grew up in Doha, Qatar until he moved to Canada with his family. He is an award-winning journalist and author who has traveled around the world to cover many of the most important news stories of the last decade. His reporting includes dispatches from the NATO-led war in Afghanistan, the military trials at Guantànamo Bay, the Arab Spring revolution in Egypt and the Black Lives Matter movement in Ferguson, Missouri. He is a recipient of Canadas National Newspaper Award for investigative reporting and the Goff Penny Memorial Prize for Young Canadian Journalists, as well as three National Magazine Award honorable mentions. He lives in Portland, Oregon.

The Boat People (2018)
Sharon Bala
"The Boat People is a burning flare of a novel, at once incendiary and illuminating. With a rare combination of precision, empathy and insight, Sharon Bala has crafted an unflinching examination of what happens when the fundamental human need for safety collides with the cold calculus of bureaucracy. In the best tradition of fearless literature, it shatters our comfortable illusions about who we really are and reveals just how asymmetrical the privilege of belonging can be. This is a brilliant debut – a story that needs to be told, told beautifully."

Lost Empress (2018)
Sergio de la Pava
"Lost Empress is a vast galaxy of a book, a searing, frequently hilarious indictment of the absurdity of modern American life told through the lens of this country's two most violent pastimes-professional football and criminal justice. To spend time inside the unfiltered mind of a writer like Sergio de la Pava is a rare, dizzying treat."

An Ocean of Minutes (2018)
Thea Lim
"Amidst the breathtaking world Thea Lim has created in An Ocean of Minutes is a profound meditation on the inhumanity of class and the limits of love. It takes immense talent to render cruelty both accurately and with honest beauty - Lim has pulled it off. This is a story about the malleability of time, but at its core lives something timeless."
Visitors to this page also looked at these authors
Stephen King
Tami Hoag
Paul Cleave
Sharon Bala
Sue Burke
Robert Holdstock
Hanif Kureishi
Théophile Gautier
Guy de Maupassant
Agatha Christie
Jay Anson
Steve Erickson
Maryse Condé
Tricia Sullivan
Philip Kerr
Mary Doria Russell