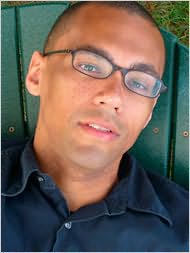 (b.1972)
Victor LaValle, born February 3, 1972, was raised in Flushing and Rosedale, Queens. He graduated from Cornell University with a degree in English and received his M.F.A. in Fiction from Columbia University. He has been a fellow at the Fine Arts Work Center in Provincetown. He lives in Brooklyn and teaches writing at Columbia University.

Victor LaValle is the author of the short story collection 'Slapboxing with Jesus' and two novels, 'The Ecstatic' and 'Big Machine'.

He has been the recipient of numerous awards including a Whiting Writers' Award, a United States Artists Ford Fellowship, a Guggenheim Fellowship and the key to Southeast Queens.

He can be kind of hard to reach.

The Reactive (2014)
Masande Ntshanga
"The Reactive is one of the most exciting debut novels Iâ€™ve read in years. A coming of age novel for one young man and, seemingly, a generation."

The Night Ocean (2017)
Paul La Farge
"A sly, witty, but still loving send-up of H.P. Lovecraft and some of the grand anxieties of the American 20th century."

Perennials (2017)
Mandy Berman
"Perennials manages to be warm and loving and still wallop you with moments of shock and pain. What an exciting debut."

The Twelve-Mile Straight (2017)
Eleanor Henderson
"This engaging, expansive novel manages to feel historical and, sadly, up to the minute as it probes the sins at the heart of the American experience. This is the kind of novel you sink into, live inside. When you’re finished it will live inside you. A bravura performance."

If You Leave Me (2018)
Crystal Hana Kim
"If You Leave Me is a historical novel that manages to feel current and captivating, a family saga, and a portrait of a woman--a mother--who will mesmerize, shock, and surprise. Lovingly told, lyrical, and smart."

The Atlas of Reds and Blues (2019)
Devi S Laskar
"A brown woman lies bleeding on the concrete. An agent of the state has shot her down in her own driveway. Her life - and the lives of her children, her whole family - spools out as she waits to find out if she will die. The Atlas of Reds and Blues is a triumph of book, mining the most searing art out of a horror pulled straight from current events. Devi S. Laskar announces herself as a brilliant, bold talent with her debut novel. This is a book that should be read, and discussed, and cherished."

Africaville (2019)
Jeffrey Colvin
"Africaville turns history into an engaging family story, one that begins in Nova Scotia and then travels across North America. It's a gripping and moving book. Jeffrey Colvin writes with such affection and authority. I thought of the fine work of Esi Edugyan and Edward P. Jones and E.L. Doctorow, too. He deserves to be counted in their number and this is an excellent debut."

These Ghosts Are Family (2020)
Maisy Card
"Every family's got secrets but Abel Paisley's secret is monstrous and mesmerizing. These Ghosts are Family begins with energy and intrigue and, really, never lets up. This book is painful and shocking but it can be funny as hell, too. What a talented writer. Maisy Card has written one of the best debut novels I've read in many years."

The Ancestor (2020)
Danielle Trussoni
"A surprise inheritance, remote castle in the Alps, and a cursed family bloodline? Yes, please! The Ancestor is a gloriously modern Gothic novel, blending mythic monsters with modern science in ways that gave me a thrill. Danielle Trussoni has written one hell of a tale."

The Only Good Indians (2020)
Stephen Graham Jones
"How long must we pay for our mistakes, for our sins? Does a thoughtless act doom us for eternity? This is a novel of profound insight and horror, rich with humor and intelligence. The Only Good Indians is a triumph; somehow it’s a great story and also a meditation on stories. I've wondered who would write a worthy heir to Peter Straub's Ghost Story. Now I know the answer: Stephen Graham Jones."

Want (2020)
Lynn Steger Strong
"Teacher, mother, best friend, wife and more. Is there any time or space left for Elizabeth outside of these roles? Lynn Steger Strong illustrates the heroic act of one woman trying her best to keep it all together; succeeding and failing and trying again. Want is honest and funny and profoundly moving. I tore through this book in two days and when it was over I wanted to start it again."