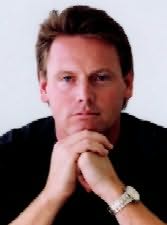 (b.1959)
Sigmund Brouwer is a well-known author with books published by mainstream and evangelical publishers. He has written scores of books across many genres, from children's picture books to scientific thrillers, and more.

One of six children born to a family with Dutch heritage, Brouwer is a native of Red Deer, Alberta, Canada. He is married to a Christian singer Cindy Morgan and has two daughters. Brouwer divides his time between Nashville, Tennessee and Red Deer, Alberta, and enjoys sports such as ice hockey and golf.

Brouwer is perhaps most noted for his work with Hank Hanegraaff in the controversial Last Disciple series, released in 2005 and 2006. It is a fictional series set in the "end times" of the 1st century AD, narrated from a Partial-Preterist viewpoint.

A favorite cause of Brouwer's is to encourage children to love books. He visits 80,000 students per year at schools across North America to present Rock And Roll Literacy, drawing on the theme that great stories, like great songs, engage our feelings. To help with the literacy cause, he has also co-written two hockey fiction books in French with Gaston Gingras, who won a Stanley Cup with the Montreal Canadiens in 1986. Brouwer also frequently presents Rock and Roll Literacy with six-time Stanley Cup Champion and NHL Hall-of-Famer Bryan Trottier, all in efforts to hook reluctant readers.