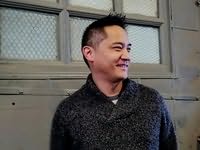 Mike Chen is a lifelong writer, from crafting fan fiction as a child to somehow getting paid for words as an adult. He has contributed to major geek culture websites (The Mary Sue, The Portalist), covered the NHL for mainstream media outlets, and ghostwritten corporate articles appearing in Forbes, Buzzfeed, Enterpreneur, and more. A member of SFWA and the Codex Writers group, Mike calls the San Francisco Bay Area home, where he can often be found playing video games and watching Doctor Who with his wife, daughter, and rescue animals.

The Unlikely Escape of Uriah Heep (2019)
H G Parry
"H.G. Parry has crafted an imaginative and unique exploration of how words shift our lives in ways big and small. The Unlikely Escape of Uriah Heep is a rollicking adventure that thrills like Neil Gaiman's Neverwhere mashed up with Penny Dreadful in the best post-modern way. Equal parts sibling rivalry, crackling mystery, and Dickensian battle royale, it'll be one of your most fun reads this year."

Rule (2020)
(Unraveled Kingdom, book 3)
Rowenna Miller
"Miller caps off the Unraveled Kingdom trilogy with a seamless blend of magic and heart, all under the cloud of war and revolution. Smart, thrilling, and full of charm, Rule is the perfect sendoff for the tale of Sophie Balstrade."

Set My Heart to Five (2020)
Simon Stephenson
"Both whimsical and lyrical, Set My Heart to Five is an astounding examination of the human condition and all the things that make it up: curiosity, duty, art, dreams, and -- of course -- love. It is, much like its hero Jared, made up of both laughter and tears, and one of the most unique books ever crafted."

Road Out of Winter (2020)
Alison Stine
"The Road infused with feminist grit, Alison Stine's ROAD OUT OF WINTER focuses on the true seeds of hope during a climate apocalypse: the things that nurture both our bodies and our souls. A startling and intimate look at what happens when our planet turns against us."

The Mirror Man (2020)
Jane Gilmartin
"Part Twilight Zone episode and part medical thriller, The Mirror Man seamlessly weaves together clones and family for a fascinating story about the lies we tell ourselves--and what we might do with second chances. Tense, poignant, and frequently funny, Gilmartin's debut waxes lyrical on the human condition while racing to an unforgettable finish."