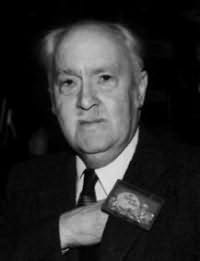 aka Grendel Briarton
US writer and anthologist, born Alfred Reginald Kahn he changed his name legally to Bretnor after World War Two in Vladivostok, Siberia, but resident in the US from 1920; active after World War Two in a number of genres as an author of both fiction and nonfiction. His interest in military theory, which first generated articles and Decisive Warfare (1969), later inspired the The Future at War series of anthologies.

Visitors to this page also looked at these authors
Reginald Hill