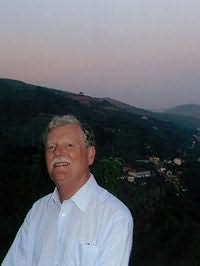 (b.1943)
Colin Dann was born in Richmond, London, in 1943.  After leaving the local grammar school he worked first for a large textile company before his real love the world of books brought him a job in publishing. He worked for William Collins, Sons & Co. for 13 years. During this time, in odd hours at home, Colin wrote his first book, The Animals of Farthing Wood, which was published finally in 1979 after years of trying.  It was an immediate success, winning awards is now translated into sixteen languages.  The book has never been out of print since its first publication 25 years ago.  Six sequels and one prequel have followed and enjoyed similar success.

In 1992 a major animation series based on the Farthing Wood stories was broadcast by the BBC and it stole the hearts of children throughout Britain and Europe.

Colin has been a leading childrens author for more than twenty years.  In addition to the Farthing Wood books he has written many other animal stories, and is currently working on a sequence of novels about a pride of African Lions.

Colin lives with his wife and their cat in a converted Oast house on the Kent/Sussex border.  To relax, Colin goes for long walks in the country, reads and listens to music.  His favourite book is The Count of Monte Cristo, Winnie the Pooh is his favourite character while Bill Bryson is his preferred author.