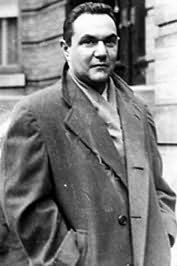 (1916 - 1986)
Stanley Ellin was born in Brooklyn, New York, and educated at Brooklyn College. He worked as a teacher, a steelworked and a dairy farmer, and served in the US Army in World War 2, before becoming a full-time writer in 1946. His first published short story, 'The Speciality of the House' caused an immediate sensation and won him a special Ellery Queen Award. He won two Edgars for short stories, as well as one for The Eighth Circle, Le Grand Prix du Meilleur Roman Policier Etranger for Mirror, Mirror on the Wall and was made a Grand Master of the Mystery Writers of America in 1980.

Novellas
The Speciality of the House (1948)