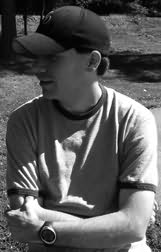 aka James Kidman
Brian James Freeman sold his first short story when he was fourteen years old and his first novel when he was twenty-four. His novels, novellas, short stories, essays, and interviews have been published by Warner Books, Cemetery Dance Publications, Borderlands Press, Book-of-the-Month Club, Leisure, and many others.

His novella, The Painted Darkness, took the Internet by storm as an eBook during the summer of 2010, reaching more than 30,000 readers in the first few months after publication. The book was published in hardcover in December 2010 by Cemetery Dance Publications, with the signed editions selling out in just 24 hours. Due to overwhelming demand from booksellers, the first printing of the trade edition went out of print on the day of publication and Cemetery Dance rushed a second printing. The Painted Darkness was also offered as the "Free eBook of the Month" by WOWIO.com in October 2010 and within two weeks it became the most downloaded title in the program's history.
He lives in Pennsylvania with his wife, two cats, and two German Shorthaired Pointers. More books are on the way.