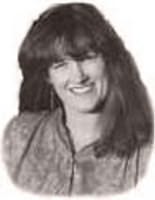 (Susan Napier Potter)
New Zealand
Susan Napier was born (appropriately, for a romance writer) February 14, St.Valentine's Day, in Auckland, New Zealand. She was 11 years old when herfirst story was published on the children's page of a daily newspaper andfrom that time on she was a confirmed scribbler. She says: "I've wanted tobe a writer as long as I can remember possibly as a defense against achildhood of constantly being nagged to take my nose out of a book and getout into the fresh air! Now, at least I have a perfect excuse for alwayshaving my nose in a book. I also get the last laugh on my two elder brotherswho were always snickering at me for reading romances." By the time shegraduated from high school she was determined to make writing her full-timecareer.

Her first job was as a reporter at the Auckland Star, the city's leadingevening newspaper. It was there that she met her archetypal hero, thenewspaper's tall, dark, and handsome chief reporter, Englishman Tony Potter.In the best traditions for romance, Susan and Tony fell in love and married.After her marriage Susan left the newspaper to work for several years as ascript writer-researcher-production assistant for a film company, and it isthere that she learned the craft of writing dialogue, so essential for asuccessful novelist. After her sons, Simon and Ben, were born she worked asa freelance documentary scriptwriter before deciding that it was time to tryher hand at writing the kind of fiction that she enjoyed reading.

Susan says: "At the time I started writing books I was mother to a baby anda toddler, with a husband who was happy to support me in my shot at becominga published author. I gave myself five years (until the children startedprimary school) to succeed, and made it in three." It took Susan nearly twoyears to finish her first manuscript, which was accepted by Mills & Boon inLondon after an extensive rewrite, which took almost another year. By thetime Sweet Vixen was published in 1983 she had had a second book accepted,and was working on a third. The year 2000 saw her 30th book published byMills & Boon.

Susan and Tony still live in the house they bought soon after theirmarriage, next to a nature reserve in a leafy suburb of Auckland. However,extensive renovations have provided for their expanding lives, including abook-crammed office for Susan, sprawling living quarters and a large,solar-heated, saltwater pool in a sunny, paved courtyard. Tony now works fora national Sunday newspaper and retains his hero status in her life, servingas a constant source of inspiration and information for her books. Theirsons, who are now studying at university in Auckland, divide their timebetween studying and competing at national and international track-and-fieldmeets, still live in the family home; and with their girlfriends andfriends, two cats (one timid and one bad-tempered), and Susan's elderlyparents living nearby, her non-writing time is mostly taken up with copingwith the happy chaos of family life. And reading romances, of course!

Taken by the Millionaire
4. Accidental Mistress (2007)