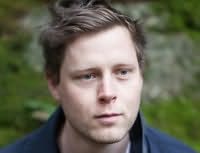 (b.1981)
Max Porter trained as an art historian but his career took him in to the world of books. He previously managed an independent bookshop and won the Young Bookseller of the Year award in 2009. Max joined Granta and Portobello Books in 2012 as Commissioning Editor and after working with authors such as Man Booker prize-winner Eleanor Catton and Masha Gessen, he has now written his own book.

Grief is the Thing with Feathers is a story of a father and two young boys in the weeks following the death of their mother. In this moment of despair they are visited by Crow - antagonist, trickster, healer, babysitter. This self-described sentimental bird is attracted to the grieving family and threatens to stay until they no longer need him. As weeks turn to months and physical pain of loss gives way to memories, this little unit of three begin to heal.

Part novella and part essay on grief, Grief is the Thing with Feathers is sensitive and affecting and offers light relief with unexpected humour.

Attrib.: And Other Stories (2017)
Eley Williams
"It's just the real inexplicable gorgeous brilliant thing this book. I love it in a way I usually reserve for people."

The Porpoise (2019)
Mark Haddon
"A full-throttle blast of storytelling mastery. I read it on the plane in a single sitting at 30,000 feet and enjoyed every second. Gorgeously written and very clever, but also such fun! Ancient and modern overlap and tangle in exhilarating ways, it’s like romping through a Literary Netflix: an episode of something historical and bloody, then something slick and contemporary, then something really weird and unnerving. So many pleasures in one book. The Porpoise is a joy to read."

The Bass Rock (2020)
Evie Wyld
"A modern gothic triumph. Spectacularly well-observed, profoundly disquieting and utterly riveting. Like all Evie Wyld's work it is startlingly insightful about psychological and physical abuse. It is a haunting, masterful novel."

Weather (2020)
Jenny Offill
"The end times don't deserve such exquisite literary investigation. I folded down every page until I realised there was no point, I would fold them all, I would read the book again the second I was finished. A gorgeous, funny, deadly serious and warmly revelatory mesh of perfect paragraphs."

The Swallowed Man (2020)
Edward Carey
"Art objects live in the belly of this marvellous novel, images swallowed by text, sustained by a sublime and loving imagination. Like all Edward Carey's work The Swallowed Man is profound and delightful. It is a strange and tender parable of two maddening obsessions; parenting and art-making."

Diary of a Film (2021)
Niven Govinden
"Precision engineered European modernism from a master stylist. It walks us into a luminous and loving conversational drama, rich with complex erotics and interwoven private agonies. He writes exquisitely about art making, about obsession and responsibility. It's a gorgeous novel."