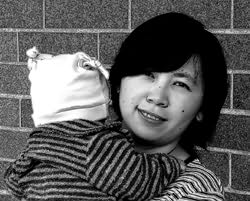 China (b.1972)
Yiyun Li grew up in Beijing and came to the United States in 1996. She has received fellowships and awards from Lannan Foundation and Whiting Foundation. Her debut collection, A Thousand Years of Good Prayers, won the Frank O'Connor International Short Story Award, PEN/Hemingway Award, Guardian First Book Award, and California Book Award for first fiction. Her novel, The Vagrants, won the gold medal of California Book Award for fiction, and was shortlisted for Dublin IMPAC Award. Gold Boy, Emerald Girl, her second collection, was a finalist of Story Prize and shortlisted for Frank O'Connor International Short Story Award. Her books have been translated into more than twenty languages. She was selected by Granta as one of the 21 Best Young American Novelists under 35, and was named by The New Yorker as one of the top 20 writers under 40. MacArthur Foundation named her a 2010 fellow. She is a contributing editor to the Brooklyn-based literary magazine, A Public Space. She lives in Oakland, California with her husband and their two sons, and teaches at University of California, Davis.

Non fiction
Dear Friend, From My Life I Write to You in Your Life (2017)

Locke 1928 (2007)
Shawna Yang Ryan
"A beautiful debut, Water Ghosts opens up a page in history that sometimes is forgotten by both cultures that once coexisted in Locke, a Sacramento Chinese farming town. By mapping out the familiar and the strange territories of human passion and retelling the old myths, Shawna Yang Ryan tells a story that, in the end, is about how America was truly made."

Landfalls (2015)
Naomi J Williams
"Naomi J. Williams is an astute observer of both actions and psychologies, and this brilliant book brings us closer to our fellow explorers before our time."

Last Stories (2018)
William Trevor
"A beautiful writer... I would not have become a writer at all had I not discovered his work."

99 Nights in Logar (2019)
Jamil Jan Kochai
"Imagine a twelve-year-old Don Quixote traversing a world full of absurdities and tragedies. Imagine The Arabian Nights set with America overshadowing an ancient landscape. 99 Nights in Logar is hilariously sad and heartbreakingly funny. Jamil Jan Kochai, a thrilling new writer, achieves in this book that rare quality of a storyteller both ageless and contemporary."

Wild Swims (2020)
Dorthe Nors
"Reading Nors's work, one is reminded of the thrills and dangers of living."

Heaven and Earth (2020)
Paolo Giordano
"An intense novel about passions and reasons, unbreakable bonds and reckless excursions. Giordano is a master storyteller."

Likes (2020)
Sarah Shun-lien Bynum
"Sarah Shun-lien Bynum not only makes us see and feel what we may have missed in our busy lives, but articulates what we see and feel with the precise words we’ve always been searching for but rarely find. How does she capture the world in its shimmery and inexplicable state so deftly? Stories in this collection lead the readers to feel nostalgic for experiences both lived and missed, alarmed and yet thrilled by the mysteries hidden in everyday moments, and above all, hopeful and grateful that there is no need to compromise: we can live as fully and expansively as these stories."
Visitors to this page also looked at these authors
Margot Livesey
Benjamin Black
Edan Lepucki
A D Miller
Don DeLillo
Morgan Llywelyn
Tim O'Brien
Penelope Lively
C S Lewis
Terry Brooks
Emma Donoghue
Garth Nix
Nancy Kress
Jonathan Lethem
Ted Chiang
Sinclair Lewis