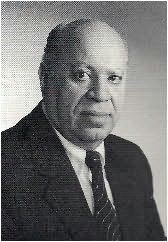 (1920 - 1997)
Herbert Resnicow was a civil engineer, earning his degree at the Polytechnic Institute of Brooklyn, who made a drastic career move at the age of 60 when his first detective novel, The Gold Solution (1983), landed him a nomination for an Edgar statuette in the category Best First Novel. Resnicow was unable to secure the coveted price, but the tone was set and he wrote a score of classically-styled whodunits in the succeeding decade, featuring the wise-cracking behemoths Alexander and Norma Gold or the entrepreneur Ed Bear and his philosopher son Warren, as well as outsourcing his talent to abet Edward I. Koch and Pelé with their literary aspirations.

In spite of these accolades, Herbert Resnicow has evanesced from popular view and virtually nothing is known about his life at least not online. Nearly every scrap of personal information I have on him was culled from his obituary, which also mentioned that he served overseas with the Army Corps of Engineers during WWII and left behind a wife, four children and four grandchildren, but a synopsis or review of one his detective stories were even harder to find before I took up his cause. This makes me feel at times as if I'm the only who cares and appreciates this neglected, modern-day practitioner of the locked room mystery who did his part in continuing a fine old tradition that is worth preserving.