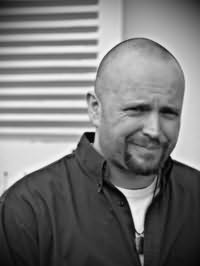 aka Gavin Deas
Gavin Smith was born in Dundee in the same year that Iron Butterfly recorded Inna-Gadda-da-Vida. He has also lived in Camberley, Hayling Island, Portsmouth, Hull, Leamington Spa and is currently living a near feral existence in Leicester (if you see him in the streets he will write science fiction for sweeties). Anyone who has been to any of these places will understand why his fiction is like it is.

He has a degree in writing for film and a Masters in medieval history. Veteran is his first novel but he is patiently waiting for one of the 2.5 scripts that have been optioned to be turned into films.

He likes to travel and dive when he can afford it and in his free time he enjoys getting the s**t kicked out of him whilst practicing Silat. He is hoping that the book does well so he can buy a motorbike.

Pariah (2017)
(Eternity War, book 1)
Jamie Sawyer
"Jamie Sawyer is easily one of the best military SF writers working today - a must read for anyone who grew up watching Aliens and reading 2000AD."

One Way (2018)
(Frank Kitteridge, book 1)
S J Morden
"One Way is a taut and claustrophobic hard SF thriller. Morden does a fantastic job of ratcheting up the tension like oxygen escaping from a pressurised Martian habitat."

The Traitor God (2018)
(Age of Tyranny, book 1)
Cameron Johnston
"High magic and low lives collide in The Traitor God, one part street-level procedural and two parts an urban magic apocalypse, this is fantasy walking tall and carrying a big stick."

The Ember Blade (2018)
(Darkwater Legacy, book 1)
Chris Wooding
"If you like Brandon Sanderson you'll love this. The best epic fantasy for years."

The End of Magic (2019)
Mark Stay
"Takes the tropes of high fantasy and uses them to wield an original, compelling and intricately plotted story… exactly the kind of fantasy that we need more of."

We Are The Dead (2019)
(Last War Trilogy, book 1)
Mike Shackle
"Hooked from page one, We Are the Dead rattles along with the pace of a runaway bullet train. Original, engaging, flawed but very-human characters draw us into a world rent by war, a world of brutal occupation, tarnished honour and devastating magics. This is a powerful debut and Shackle is an author to watch."