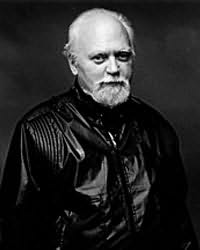 (1932 - 2007)
Robert Anton Wilson is the coauthor, with Robert Shea, of the underground classic The Illuminatus! Trilogy , which won the 1986 Prometheus Hall of Fame Award. His other writings include Schrodinger's Cat Trilogy, called "the most scientific of all science fiction novels," by New Scientist, and several nonfiction works of Futurist psychology and guerilla ontology, such as Prometheus Rising and The New Inquisition. Wilson, who sees himself as a Futurist, author, and stand-up comic, regularly gives seminars at Eslan and other New Age centers. Wilson has made both a comedy record (Secrets of Power) and a punk rock record (The Chocolate Biscuit Conspiracy), and his play Wilhelm Reich in Hell was performed at the Edmund Burke Theatre in Dublin, Ireland. His novel Illuminatus! was adapted as a 10-hour science fiction rock epic and performed under the patronage of Her Majesty Queen Elizabeth II at Great Britain's National Theatre, where Wilson appeared briefly on stage in a special cameo role. Robert Anton Wilson is also a former editor at Playboy magazine.