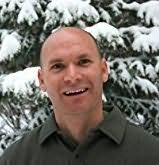 (b.1973)
Anthony Doerr is the author of the story collections Memory Wall and The Shell Collector, the novels All the Light We Cannot See and About Grace, and the memoir Four Seasons in Rome. He has won four O. Henry Prizes, the Rome Prize, the New York Public Librarys Young Lions Award, the National Magazine Award for fiction, a Guggenheim Fellowship, and the Story Prize. Doerr lives in Boise, Idaho, with his wife and two sons.

Of Sea and Cloud (2014)
Jon Keller
"...a gorgeously written exploration of faith and loyalty, love and dishonesty.... I will never forget these characters, these waters, or the harrowing dramas unfolded upon and beneath them."

Slade House (2015)
David Mitchell
"I gulped down this novel in a single evening. Intricately connected to David Mitchell’s previous books, this compact fantasy burns with classic Mitchellian energy. Painstakingly imagined and crackling with narrative velocity, it’s a Dracula for the new millennium, a Hansel and Gretel for grownups, a reminder of how much fun fiction can be."

Barkskins (2016)
Annie Proulx
"Magnificent... Barkskins flies... One of the chief pleasures of Proulx’s prose is that it conveys you to so many vanished wildwoods, where you get to stand ‘tiny and amazed in the kingdom of pines.’ This is also the great sadness of Barkskins. The propulsive tension here is generated not by wondering what will happen to each character, but by knowing that the forests will be leveled one after another... If Barkskins doesn’t bear exquisite witness to our species’s insatiable appetite for consumption, nothing can."

Mischling (2016)
Affinity Konar
"One of the most harrowing, powerful, and imaginative books of the year."

The Changeling (2017)
Victor LaValle
"If the literary gods melted together Haruki Murakami and Ralph Ellison...the result would be Victor LaValle."

Lake City (2019)
Thomas Kohnstamm
"Lake City is a darkly funny and extremely relevant debut novel about American inequality and moral authority, featuring a sad-sack antihero who takes way too long to grow up. When he finally does, the results are beautiful, and the book ultimately becomes an elegy for a now-gone Seattle, and a lesson in how the place we’re from never fully lets us go."