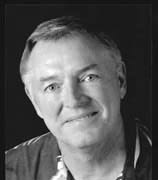 Les Standiford is a historian and author and has since 1985 been the Director of the Florida International University Creative Writing Program. Standiford has been awarded the Frank O'Connor Award for Short Fiction, a Florida Individual Artist Fellowship in Fiction, and a National Endowment for the Arts Fellowship in Fiction, and belongs to the Associated Writing Programs, Mystery Writers of America, and the Writers Guild.

Octopus Alibi (2003)
(Alex Rutledge, book 4)
Tom Corcoran
"Octopus Alibi captures dead-on Key West's singular blend of tropical beauty, exotic charm, and inimitable sleaze. The tale is as twisted and delicious as an island cocktail -- if Tom Corcoran has become the Ross Macdonald of Margaritaville, then protagonist crime scene photographer Alex Rutledge is Lew Archer incarnate, in a parrot-head shirt. This one will take you there."

Unreliable (2017)
Lee Irby
"Unreliable is, in truth, irresistible – an impressive high-wire act of a thriller combining the comic and the tragic in pitch-perfect style."