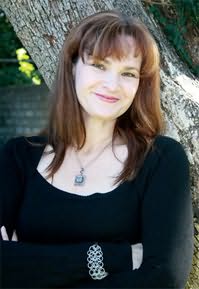 Specialising in dark fantasy and horror, Angela Slatter is the author of The Girl with No Hands and Other Tales, Sourdough and Other Stories, The Bitterwood Bible and Other Recountings, and Black-Winged Angels, as well as Midnight and Moonshine and The Female Factory (both with Lisa L. Hannett). She has won five Aurealis Awards, one British Fantasy Award, and a World Fantasy Award, as well as being a finalist for the Norma K. Hemming Award.

She has an MA and a PhD in Creative Writing, is a graduate of Clarion South 2009 and the Tin House Summer Writers Workshop 2006, and in 2013 she was awarded one of the inaugural Queensland Writers Fellowships.

Her novellas, Of Sorrow and Such (from Tor.com), and Ripper (in the Stephen Jones anthology Horrorology, from Jo Fletcher Books) will be released in October 2015.

Angelas urban fantasy novel, Vigil (based on the short story Brisneyland by Night), will be released by Jo Fletcher Books in 2016, and the sequel, Corpselight, in 2017. She is represented by Ian Drury of the literary agency Sheil Land.

The Bureau of Them (2016)
Cate Gardner
"An assured example of the best horror can offer."

The Burning House (2018)
Neil Spring
"Masterfully mixing history with a damned fine ghost story, The Lost Village contains echoes of James Herbert at his spectral best. Neil Spring has produced another atmospheric read, and his Sarah Grey is a narrator who's hard to forget."

Strange Ink (2018)
(Harry Hendrick, book 1)
Gary Kemble
"With an intense and immediate sense of place, a cracking pace, and a great everyman hero, Gary Kemble's debut novel Strange Ink is by turns thrilling and haunting, and will keep readers glued to the page."

Unholy Land (2018)
Lavie Tidhar
"Extraordinary, confronting, intriguing. Unholy Land is a dream of a home that’s never existed, but is no less real for that: a dream that smells like blood and gunpowder. It’s precisely what we’ve come to expect of Tidhar, a writer who just keeps getting better."

Snow White Learns Witchcraft (2019)
Theodora Goss
"In Snow White Learns Witchcraft, Theodora Goss weaves words that look disturbingly like snow and feathers into new stories that are familiar but uniquely remade. A Goss heroine breathes life into silent castles, imprints her own image in darkling mirrors, and plucks enchanted apples from the hands of peddlers; she is a bear’s bride, a newly minted queen, a thunderstorm of a woman and so much more. Dr. Goss cements her position as one of our foremost re-interpreters of fairy tales."