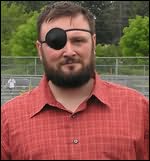 (b.1970)
Laird Barron was born in Alaska, where he raised and trained huskies for many years.

He moved to the Pacific Northwest in the mid 90s and began to concentrate on writing poetry and fiction.

Mr. Barron currently resides in upstate New York and is hard at work on many projects.

Collections
The Imago Sequence (2007)
Occultation (2010)
aka The Beautiful Thing That Awaits Us All
Shades of Blue and Gray (2013) (with Albert E Cowdrey and Nick Mamatas)
Swift to Chase (2016)
Ashes and Entropy (2018) (with Matthew M Bartlett, Nadia Bulkin, Kristi DeMeester, John Langan, Jon Padgett, Lucy A Snyder and Damien Angelica Walters)

Down (2012)
Nate Southard
"A sleek and nasty tale, Southard continues to carve a name for himself with Down."

Altar (2016)
Philip Fracassi
"Altar is redolent of hard-edged supernatural horror from the golden days of McCammon and King. Nobody is safe in a Fracassi story."

The Fisherman (2016)
John Langan
"The Fisherman is an epic, yet intimate, horror novel. Langan channels M. R. James, Robert E. Howard, and Norman Maclean. What you get is A river Runs Through It...Straight to hell."