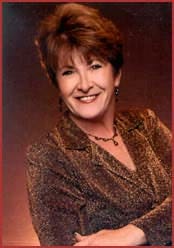 aka Peggy Morse
Peggy Bozeman was born in Texas, U.S.A.. As a young girl, she always wantedto live in the country, where she could have a horse and experience the lifeof a cowgirl. Unfortunately, she lived in town and she had to settle forvisits to her grandparents' farm. When she was in High School, her fatherpassed away, leaving her mother to raise three daughters alone. Her motherworked hard to see that we never lacked for anything. Peggy says: "She alsoencouraged all three of her daughters to obtain college degrees, stressingthe importance of an education, as well as insisting that we be prepared tosupport ourselves in the event we were ever left on our own, as she was."

A graduate of Stephen F. Austin State University in Nacogdoches, Texas, witha BBA, Peggy worked on her master's degree in writing at the University ofCentral Oklahoma. Before penning her first romance, she co-wrote the storyof the Edmond, Oklahoma, Post Office massacre for Norman Vincent Peale'sGuideposts magazine. This foray into nonfiction was exciting but proved toher that her heart belonged in romantic fiction, where there is always ahappy ending.

A blind date while in college served as the beginning of a romance that haslasted 25 years for Peggy Moreland though Peggy will be quick to tell youthat she was the only blind one on the date, since her future husband, anTexan green beret, sneaked into the office building where she worked andchecked her out prior to asking her out! For a woman who lived in the samehouse and the same town for the first 23 years of her life, Peggy has done alot of hopping around since that blind date and subsequent marriage. Herhusband's promotions and transfers have required 11 moves over the years,but those "extended vacations" as Peggy likes to refer to them, haveprovided her with a wealth of ideas and settings for the stories she writesfor Silhouette.

Though she's written for Silhouette since 1989, Peggy actually began herwriting career in 1987 with the publication of a ghostwritten story forNorman Vincent Peale's inspirational Guideposts magazine. While exciting,that foray into nonfiction proved to her that her heart belongs in romanticfiction where there is always a happy ending. Since her first romance, Peggycontinues to delight readers with stories set in her home state of Texas.She enjoys writing books set in small towns and on ranches, and worksdiligently to create characters unique, but true, to those settings. In 1997she published her first miniseries, Trouble in Texas, and in 1998 introducedher second miniseries, Texas Brides. In October 1999, Peggy joinedSilhouette authors Dixie Browning, Caroline Cross, Metsy Hingle, and CindyGerard in a continuity series entitled The Texas Cattleman's Club. Peggy'scontribution to the series was Billionaire Bridegroom. This was followed byher third series, Texas Grooms, in the summer of 2000. A second invitationto contribute to a continuity series resulted in Groom of Fortune, inDecember 2000. Winner of the National Readers' Choice Award, a nominee forRomantic Times Reviewers' Choice Award, and a two-time finalist for theprestigious RITA(R) Award, Peggy has had her books appear frequently on theUSA TODAY and Waldenbooks bestseller lists.

Peggy Morse and her husband currently live on a ranch in the Texas HillCountry, they have three children--all grown-up now and living on their own.She is the proud owner of a registered quarter horse. When not writing,Peggy enjoys spending time at the farm riding her quarter horse, Lo-Jump,and competing in local barrel-racing competitions. In 1997 she fulfilled alifelong dream by competing in her first rodeo and brought home two silverchampionship buckles, one for Champion Barrel Racer, and a second forAll-Around Cowgirl. Also, you can usually find Peggy outside tending thecattle, goats and other critters on their ranch.

Collections
The Convenient Marriage / Reunion of Revenge (2007) (with Kathie DeNosky)

Series contributed to
American Heroes : Against All Odds
17. Run for the Roses (1990)

Greatest Texas Love Stories of all Time
4. A Willful Marriage (1996)