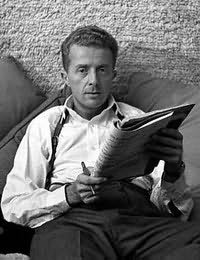 (1910 - 1999)
Paul Bowles grew up in New York, and attended college at the University of Virginia before traveling to Paris, where became a part of Gertrude Stein's literary and artistic circle. Following her advice, he took his first trip to Tangiers in 1931 with his friend, composer Aaron Copeland.

In 1938 he married author and playwright Jane Auer (see: Jane Bowles). He moved to Tangiers permanently in 1947, with Auer following him there in 1948. There they became fixtures of the American and European expatriate scene, their visitors including Truman Capote, Tennessee Williams and Gore Vidal. Bowles continued to live in Tangiers after the death of his wife in 1973.